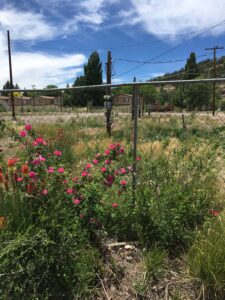 Two years ago, dozens of old mobile homes lay beyond this fence. Kids screeched and chased each other. An old woman and a green-haired girl sat on a stoop and smoked cigarettes.  The scent of chili drifted in the air. Home-made? Take-out from Los Altenos? I had no way to know.

I had pretended that I needed to pull over just outside the fence to check my phone. I know how I feel when big city and out-of-state tourons cruise the streets of my neighborhood, gawking at what they probably believe to be charming rustic people. and their charming little rustic homes.

So, I alternated fake looks at my phone with studying the world of Arrowhead village: a clothesline strung from a porch to an old Chevy’s hood ornament; at least five mud-splattered Big Wheels; a gleaming red Eighties El Camino pick-up truck; a mama dog curled around her pups. The green-haired girl looked up and waved. I rolled my window down and waved back. She walked up to the fence. “Hey, lady, who you looking for?”

“We got a million Rickys here,” she said and laughed. “But, no Martins. Maybe you mean Martinez?”

“Nope,” I said. “Maybe the guy told me that this was Ricky lived meant a different Arrowhead Park.”

“Yeah,” she said, “there might be one way over on the east side of town.” She held out her phone. “You want to google it?”

She frowned. “We’re not so good. Lady, you might not know this, but this Arrowhead Park isn’t going to be here next month. The big shots told us we have to be out by then. They gave us a few bucks to relocate. A few. My mom says they are full of shit, but what can we do?”

I flashed into an out-of-body experience of all the PandZ meetings; and endless City Council meetings; and even more  Save Our Neighborhood meetings I’d sat and strategized through. My friends and I lost every single case.

And, the only thing left to say was: “Take care.”