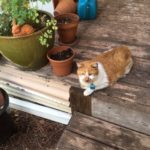 Spokescat Ruti, the Red is surrounded with love – wherever he is. Thank you for sending messages. Your words reassured him that his work goes on, though he lies in the good earth outside my back bedroom window. I miss him all the time. Cowboy Benez has seemed lost since Ruti went over. We comfort each other – and you comfort us. Here are your words:

At LAX on my way back to Japan, I was outside of Tom Bradley Terminal. A
security guard was near by smoking a cigarette and talking on a
walkie-talkie. He said into the walkie-talkie: “I’m waiting for a call
from Rudy (Ruti?)”. Out there in the world are many cats who are waiting
for a call from Ruti the Red. For me Ruti was 2 cats, the great leader
of the FLF and a cat with one of the greatest PURRs. I will not forget
my fine orange friend.  — Marty Fisk
***

I had Frankie tell me his thoughts about Ruti’s passing so here they are.  Photo enclosed as well.  hugs, L

Dear Comrades in Paws,
I am saddened by the passing of our leader and spokescat, Ruti. I have long admired the FLF and hoped to stand whisker to whisker with him one day. Alas, that is no longer possible on this earth plane. My human assures me that he was one of the truly “great” cats. She told me stories of his noble stature and dignity. He will be missed.
We must all put aside our sadness and carry on so that his sacrifices will not have been in vain. I believe in resistance to oppression and that we are stronger together. 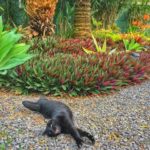 Allow me to introduce myself. I am known by many names: Frankie, the Peeper, the Boar’s Head, and my personal favorite “The Dark Lord”. My humans are slow learners but they are well intentioned. They’ve been shell shocked and depressed this past year and I’ve done my part with cuddling, purring, and soothing. As they seem to be reviving somewhat, I am free to help wherever needed.
Power to the pussy – and don’t grab without my permission. Ever. —Lynette Sheppard
Dere Ruti, we thank u for your braveness and fightingness for all humins and animals wile u were with us. The FLF will forever know your name. Never a more noble and feerce feline lived. Your work for the working-cat and regular-creetures of all ilks will live forever, and we send you much love and purrs as you soldier on into the next world. You have touched us all. We shall GET UP STAND UP! STAND UP FOR OUR RIGHTS.
Forever in solidarity,
Colby Jill, Frida, BB-cat, Buddy, Lady Paw Paw and our humin, Auntee Larayne  —Laraine Herring
*****
There will never be another Ruti!
Our beloved spokescat  was an earnest, dignified ambassador of equality, a tireless and engaging leader  of the Movement, a visionary whose passion for organizing the voiceless,  the powerless, the  bewhiskered multitudes even extended its reach into the canine world.
When Ruti first met my companion, Sally the Dog, his immediate impulse was inclusion, not antipathy. No raised hackles or arched back for Ruti! Within minutes he had conveyed his openness to dialogue and solidarity with the Dog Tribe. Soon Sally and Ruti were touching noses and plotting Revolution. (Well, actually, Sally had wandered off toward the kitchen to investigate the kitty kibble. As was often the case among cats, Sally’s enthusiasm for  building the One Great Four-Legged Union didn’t quite match Ruti’s. And our Spokescat, I believe, had stationed himself by the door and was saying, in standard English , “Goz owt. Goz owt.”)
No matter. Ruti never stopped believing in Progress: bountiful kibble and wet fud for all, comfortable sleeping arrangements, accessible litterboxes — and meaningful work–even if none of the other cats exactly yearned for that.
Ruti will always live on in our hearts and memories. He was a true champion of the little guy, a Prince among cats.  —Michael Wolcott
*****

A few words from Fizgig: “When my human first came home and told me about Ruti the Red, I was intrigued. He sounded like a wise and venerable feline, and as I am always in search of wise and venerable teachers I asked my human to speak to Rudi on my behalf. He was amenable to sharing his knowledge—I was thrilled! We began correspondence (by carrier pigeon- his idea, not mine) and I learned the deep truths about our history, our names and what it means to be a cat. I also learned the deeper truths about being a part of this world, not apart from it and was proud to be inducted into the F.L.F.

I have been actively recruiting and have brought 6 cats into the fold, with 4 skunks and 12 deer as adjunct members. Ruti advised me against allowing Prince Bandit the raccoon to join, as they are known to play both sides.

His advice was ever good, his words ever kind and his lessons ever timely. He will be sorely missed, but we carry on in his name and in the name of all creatures of good intent. With deepest sorrow and sympathy,

Fizgig, Humble student of Rudi the Red and Chief Cat of the Doney Park chapter of the F.L.F. —-Cin Norris

Here is one from Saturn:

Rest in peace my dear friend and forever comrade Ruti.  I will never forget you and will treasure the memories of our almost daily agitating and organizing adventures.  My most favorite time of all was our encounter with the group of black and white striped cats with big fluffy tails.  At first they seemed hostile, but you turned them around with your quick wit and infectious humor.  In no time they were steadfast comrades pledged to help with the cause!  You just had that way about you…
Your friend Saturn —-Dawn Dwyer