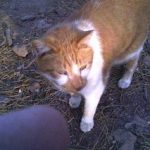 He came to the end of his current life and work on August 8. He was almost 17 and had filled every year with powerful organizing and brilliant political analysis. The kind vet, Toni Barnes eased his dying. “He’s telling us he’s ready to go.” His human, Mary, was in the hospital after a serious fall caused by an electrolyte imbalance. Dr. Barnes allowed the human’s son, Matthew, to bring Ruti to the hospital for a last good-bye.

His body is buried outside his human’s bedroom window – he and she spent many hours of evening Quality Time in that room. He would wish only that members and followers of the Feline Liberation Front would not mourn, but would organize. In the words of one of his heroes, Joe Hill: “I die like a true blue rebel. Don’t waste any time mourning. Organize!”

If any of you have stories about your experiences of Ruti, please send them in and I’ll publish them in next week’s column. Good-bye Ruti, you were the most honorable and stalwart cat I’ve ever known.