As you can see from this photograph, I have been waiting patiently for our human to transcribe my 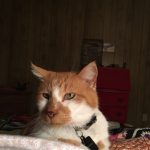 column. She has had to go to the vets many times over the last six months for a broken knee-cap, a torn back muscle and to have four teeth pulled.  We true revolutionaries understand that sometimes vet’s happen. I put a picture of her with her new smile at the end of this post.

Another loyal human has been coming to our trailer to write with us. She is a true comrade. We dedicate this column to her and to her beloved (and lately gone over) Braveheart. 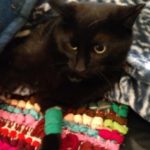 Her name is Cin. Here is what her feline companion Fizgig wrote about Braveheart:  Braveheart was a prince among cats. His Mama brought him and his brother and sisters to come live in our human’s woodpile when they were too tiny to be away from her.  It wasn’t long before the biggest of the tiny black ones was out from under his Mama’s paw and exploring the yard. His brother was his faithful lieutenant and they could always be found by side by side.

One of the early days in particular remains in my memory. The babies were only 8 or 10 weeks old and I was watching them curiously from my safe catio. The biggest of the black ones kept staring back at me and I thought he was so adorable. I told him so and he puffed up and stalked towards me. At the fence of my catio, he growled,  “You say that to my face!” Although he was barely bigger than my head, there was something strong and powerful about him, something that compelled me to back away slowly and grant him respect.
My human had watched the whole thing and I heard her voice from the window:  “Ah, so your name is Braveheart.”  He was only with us for 18 months but he made the most of every moment. As soon as he learned how to climb a tree, he was up and down every tree in the yard. No tuft of grass, wind-blown leaf, or unsuspecting sibling was safe. Neither was his Mama. There was hardly a time that I saw his Mama when Braveheart wasn’t nearby. He was always very solicitous towards her and kept her ears clean. He was in charge of his siblings, herding them to breakfast in the morning and back into their tents at dusk.
He was the brave protector of the colony, running off unsavory interlopers to keep his family safe. He knew that our human was no threat, and even let her pet his head sometimes. I know she misses him very much and I can’t imagine the hardship the rest of the colony is experiencing. I will miss him too and treasure his memory to the end of my days.
Our human:

← Where You Are Right Now: Breakthrough Challenge for what’s left of the week of 5/15/17
Safe House →