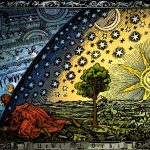 Have you met? You and your self that hungers for eternity? If you know this demanding creature, you know what poet Mary Oliver knows. Emilie Vardaman, my student at the the Sierra Vista Writing Celebration, sent me this remarkable writing by Oliver . I recognized myself and my life instantly in the first paragraph. Do you?

That busy busy self is a little frantic, but thoroughly manageable. It takes on distraction after distraction, telling itself that at any moment it will finish the dithering and be free to write. Meanwhile, the mad, gibbering, insatiably hungry subterranean self paces back and forth. It does not wait patiently. It injects powdered glass into my blood stream and relentless hallucinogens into my mind. It drives me crazy until I turn 180-degrees away from the distractions and face my hunger and my eternity squarely.

***Cin Norris writes from last week’s prompt. She is clearly in connection with the hungry self:

For me, the high school experience was pretty schizophrenic; moreso, I suspect than the average teenager. My freshman year dropped me at the doorstep of public education, and I was so lost that I not only didn’t recognize the door, a complete stranger had to open it for me.

My middle school graduating class was a large one at 8 students, all brain-washed and squeaky clean. 7 were to be home schooled, only I elected to register at Prescott High.

I’ve always seemed to possess the luck of the clueless, “falling into a pile of horse-shit and coming up smelling of roses” was a phrase oft repeated. In this particular instance, my (apparently bizarre) sense of humor attracted friends from across the social spectrum but it was the group of D&D-playing, antisocial bad-asses that brought me most firmly into their fold. It was with these people that I first thought seriously about writing. The stories that were spontaneously created and acted out or discarded without care were brain food for me. I mentioned this to one of my new friends and she recommended a couple of authors that wrote along the same genre lines I was interested in.

Mercedes Lackey and Terry Brooks had both already written a number of novels and short stories in the high fantasy universe and I eagerly checked them out from the library.

I made it through most of The Oathbound by Lackey, but only the first chapter of one of Brooks’ Shannara series.

I was devastated. Absolutely shattered. There was no way I could ever write with that sort of eloquence and description; with that poetic phrasing and on-point timing. I gave up my dream.

The stories, however, refused to give up on me. I chickened out before ever finishing a whole piece, but I would sketch out ideas or characters. I could never really write, but I could play with it.

Skip forward a couple of lifetimes and find me on the couch of my own apartment cracking open Stephen King’s The Gunslinger. “The man in black fled across the desert and the gunslinger followed.”

The 12 words at the beginning of the Dark Tower series hit me in the face and spat at me for good measure. It didn’t have to be elegant, or prosaic or pretty. It only had to make the reader keep reading.

Yes. I absolutely could do that. Not all at once, but now I understood that I didn’t have to be Misty Lackey or anyone else. I could make people turn the page.